How Do We Raise Anti-Racist Children in Nederland? 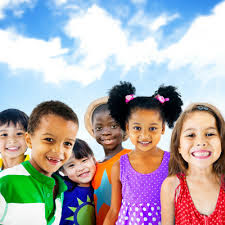 "I don't even know where to start," sighed one young mom at the Becoming an Anti-Racist Family workshop on November 5th, 2020.  Since many of us still grow up in segregated schools, churches, and neighborhoods, "we don't even know what we don't know," admitted another parent.  "My first college roommate was black and that was the first time I ever really talked to anyone in-depth about what it meant to come from a different background than my own,"  acknowledged another mama.
It is hard today to talk about racism in our homogeneous mountain town, but that doesn't mean that white parents can't intentionally prepare their children to be actors and allies in a diverse world.  We don't have to wait for people of color to lead the charge.  We can begin the process with our families.  But "I fear being accidentally racist," chimed in one mom.  In spite of the challenges, local workshops like this one are a chance to help each other learn and grow as we work to create a world for all children based on racial equity. 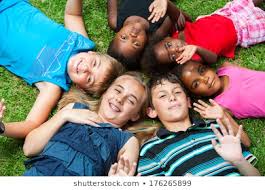 As Mountain Strong Families gathered virtually, local mom and workshop facilitator -- Sara Sandstrom -- thanked parents of toddlers to teenagers for engaging in uncomfortable conversations about racism.  The goal of this TEENS, Inc sponsored workshop was to give parents tips for raising children who will not continue to perpetuate racist ideas and actions, or to uphold racist policies.  "We teach social emotional skills to children for multiple reasons," said organizer Ann Sherman, "both to help kids nurture their own wellbeing and to give them the awareness and skills to create a society where everyone's wellbeing is supported."
Parents will need to understand the complex structure of Racism (racial prejudice combined with a system of power and privilege) in order to explain it to their children.  Sandstrom helped illustrate three types of Racism.  Most of us are aware when Interpersonal Racism rears its ugly head.  We may have family members or acquaintances who make derogatory racial comments, crack hurtful jokes, or seem oblivious as to how their actions perpetuate ongoing segregation and racial inequities, i.e. when they make decisions about voting or where to live, shop, or attend school.  Interpersonally, we hear folks complaining about the attempts there have been made to balance the wealth and power between racial groups (because when you are used to being privileged, equality can feel like oppression to you.) 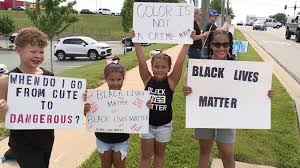 Cultural Racism was then explained as "representations and messages that behavior and values associated with whiteness are 'better' or 'normal' compared to those associated with other racial groups."  From news to Disney movies, images of racial groups shape our thinking.  Some cultural examples Sandstrom offered included the idea that black men are dangerous and black women are too mouthy.  "My mom would always lock the car doors as we drove through 'bad' neighborhoods," remembered one young dad.  The English language is also full of phrases that associate white with goodness (i.e. white lie) while blackness connotes something bad (i.e. blackmail).  Parents were challenged to intentionally counter these cultural and media images by reading books with their children which have black protagonists who illustrate black achievements and resistance to oppression.  And to overcome stereotypes by surrounding their children with diverse art, toys, movies, friends, and experiences. 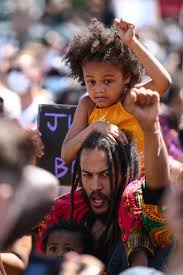 George Floyd wasn't our wake-up call.
Blacks have been sounding the same alarm for decades
and we keep hitting the snooze button. 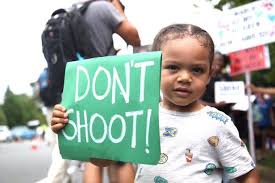 Black lives are cut short every day, not just by the brutality of some bad cops, but from all kinds of institutional policies and practices.  Statistics shared about Institutional or Systemic Racism revealed to attendees that publicly-funded school districts which are attended predominantly by children of color receive $2226 less per student than districts where mostly white children attend, Blacks are 25 times more likely to die of cancer, and the legacy of slavery as well as the practice of "redlining" neighborhoods has allowed the median white family wealth to grow to 41 times more than the median wealth of black families.  Racism resides in our Institutions when unfair policies and practices across various systems (such as housing, banking, education, criminal justice, healthcare, and religion) routinely provide unequal access to goods, services, and opportunities for people of color and advantages for white people.  Teaching kids to be nice to everyone is a start, but it doesn't alter the institutional policies that negatively impact black families.  The cycle of inequity keeps being reproduced. 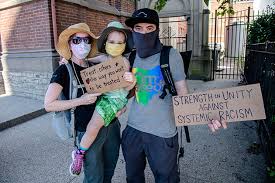 Our children will automatically be growing up in a society rife with racist images, ideologies, and institutional policies.  We are being socialized and impacted all the time, whether we know it or not.  So, how do parents raise an Anti-Racist child -- someone who realizes the history of racial inequity and works to end it?  The answer is obviously -- be very intentional.
Sandstrom shared some of our nation's history of white supremacy and then encouraged parents to -- Start young.  Talk with young children about the concept of "Race" by using books like The Skin We Live In.  After acknowledging differences and similarities, point out racial injustices to your child by discussing what is "fair/unfair", using books like Not My Idea  or Something Happened in Our Town.  Share history, context, and provide media literacy skills with older children.  Suggest they read Stamped or This Book is Anti-Racist.  Parents practiced conversing with their child about racism and realized how hard it is to explain all this.  Particularly since we live in such a homogeneous area, parents realized the need to intentionally place their families in close proximity to people of color in order to listen to their experiences and perspectives. 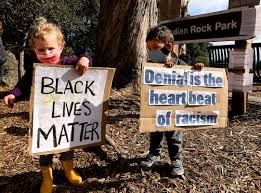 "My parents often didn't speak up so that they could avoid conflict," one dad said.  "I feel like I need to speak out.  I have earned a lot of privileges I never asked for."   It is hard for many whites to believe that they are "privileged."  We may be struggling to pay the bills too, or affected by gender, our class background, health issues or other hardships.  However, "White Privilege" doesn't mean that your life hasn't been hard; it means your skin color isn't one of the things making it harder.  Parents began to grapple with the idea of using their privilege to be Anti-Racist while raising their children.  To receive a list of suggested Action Steps, Books and Movies, and Parenting Tips, contact ann@teensinc.org.
As the workshop ended, attendees wanted more.  More ways to educate themselves.  More ideas to utilize with their children.  More chances to talk about this topic and support each other on their journey.  Is there anyone out there who would like to host an ongoing group for a bunch of motivated Anti-Racist families?   There are kids to raise and more anti-racist work to be done in Colorado. 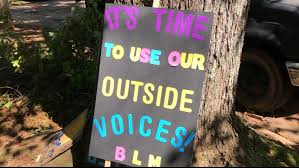 Posted by Parenting Matters in Ned at 6:06 AM